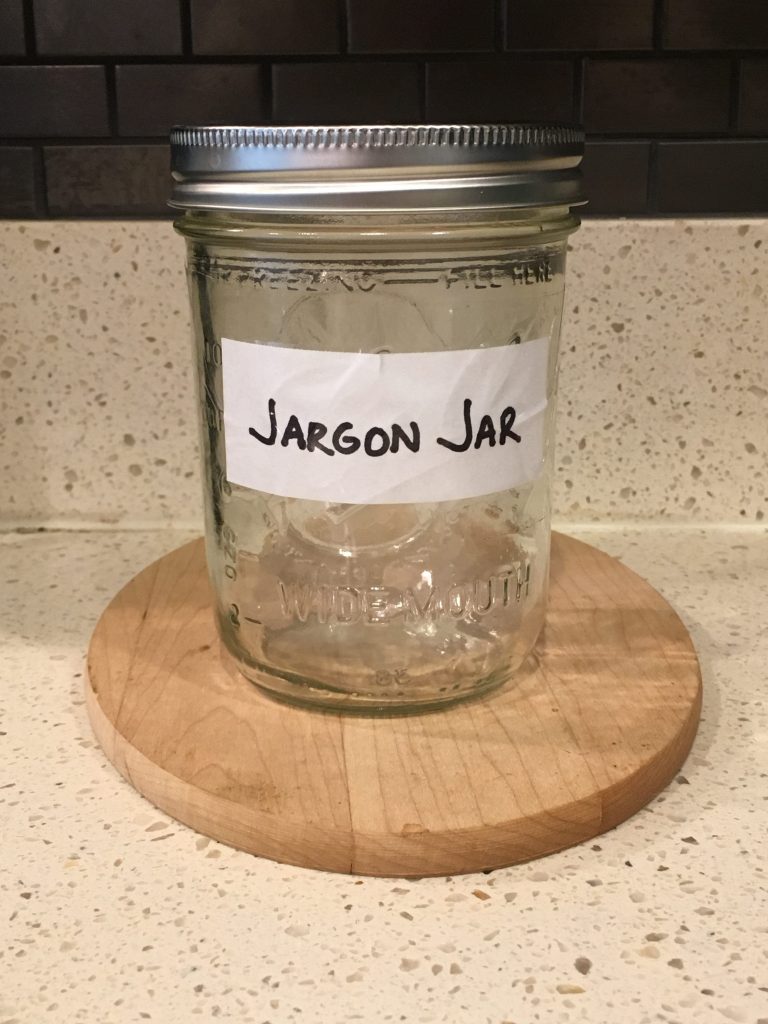 We keep a jar in the Bugle kitchen. It’s a standard Mason jar, a preferred vehicle for preserving everything from sunflower seeds to cold brew coffee. Heck, it’s even overtaken the pint glass at many hipster bars around cities. But we don’t use this Mason jar for food or beverage—we use it to represent a commitment. This is the Jargon Jar.

As you can see, it contains a high-quality, professional label that gets right to the point. So we’ll do the same.

The Jargon Jar is our vessel for discarding nonsensical, clichéd, and tired language, otherwise known as jargon. We care about language and believe in its beauty and power. Thus, the Jargon Jar is a commitment to not use these special words and phrases ourselves, and it’s a challenge to our followers to do the same. And along the way, we’ll have some fun while sending these creatures away for good.

First, we’ll explain what jargon is, and why it’s so detrimental to effective communication. Then, we’ll make our first donation to the Jargon Jar. Finally, we’ll seal that lid shut. Let’s get to it.

Why am I reading this?

Any creative person working in business—be it for a startup, a nonprofit, or a large firm—swims in an ocean of buzzwords, corporate clichés, tired tropes and jaded jargon. If you’ve ever found yourself internalizing, and then reusing, these turns of phrase for your own edification, consider yourself forgiven. We’ve all done it. Unfortunately, too many of us still do. That ends now.

We want to help you improve not only your writing, but your speech and internal process for using language. Eliminating buzzwords and jargon from your vocabulary will benefit you in the long run.

Jargon is a type of language or vocabulary, specific to a particular profession or group. Doctors have their technical words and phrases, lawyers and bankers theirs, musicians and artists too. Think of it like slang.

What makes jargon jargon, however, is its insular, vague, and indirect nature. Jargon makes sense among groups using it, but little to no sense to outsiders.

Most of us understand that Chris and Hillary are discussing some sort of big idea that needs a simpler framework. To the uninitiated, however, it appears these two may be scheming to alter sea levels and accelerate global warming.

It is bad! Inherently, it’s not the words that prove problematic; it’s the lack of context around these twists of phrase that makes jargon dangerous. Hillary and Chris may understand one another, yet they’re assuming their audience understands the circumstances surrounding their ideas. That’s a risky practice.

Before we go further, a concession: there can be a time and place for jargon. Special vocabulary can be precise and efficient when a discussion ranges from general to finely-detailed, and tactical when ideas need to be specifically targeted or contextualized. In short, using jargon is always a softer, unnecessarily complex way of communicating. To anyone writing or speaking directly, aiming for clarity and comprehension, avoid using jargon whenever possible.

So why do people use it?

We fall victim to our own self-validating curses. When we use jargon, we may think that others will perceive our ideas as smarter or more credible because we’re speaking a type of coded language that only our audiences will appreciate. Or, we’re using it tactically, to obscure real meaning. Either way, we pat ourselves on the back, thinking that we’ve accomplished a lofty linguistic goal.

Not so. At best, all we’ve really done is use extraneous, loaded phrases to get our ideas out there. And at worst, we’ve confused or misled our audience and compromised the intent of our communication. Either outcome is sub-optimal, in Chris and Hillary’s world.

‘Leverage’ is, in our estimation, the most overused word in the business and creative worlds. It’s a phonetically seductive word, one that rolls off the tongue and contains a nice sharp “V” in the middle to break up the three distinct syllables. It sounds pretty, but it’s a temptress in disguise.

Truth is, leverage is an unnecessarily complicated way of describing how to apply, manipulate, invest in, or most simply, to use something. And it’s used everywhere, usually by people trying to impress one another.

“Hey, let’s leverage those best practices from last year.”
“We need a data scientist—let’s leverage Anna!”
“We plan to leverage our assets to optimize for risk.”

Not today, you won’t. Are you exerting force on an object by means of lever? Are you applying pressure or influence over another person to achieve an outcome? You’re not? Then don’t leverage something you’re trying to use. (Related: ‘utilize’ is just as bad.)

In finance and physics, leverage has meaning. Outside those trades, it’s an empty buzzword. No one likes being used. But everyone hates being leveraged.

And thus, we have made our first donation to the Jargon Jar. Bye bye, leverage. We curse you to an eternal existence in the Jargon Jar. Don’t worry, you’ll have some friends joining you soon.

Which words and phrases boil your blood? What’s the worst jargon you heard this week? Leave us a comment below, and help us fill the jar.

One Reply to “Welcome To The Jargon Jar. Don’t You Dare Leverage This”